For The Turnstiles: Jukebox Gypsy Interview

Jukebox Gypsy are a five piece acoustic folk band formed out of Liverpool. Their imminent Irish tour in support of the bands’ second album entitled ‘The Month’ will see Jukebox Gypsy play venues in every part of the country. Here Isaac answers a few questions about the band, the songwriting process, their inspirations and previous Irish tours. 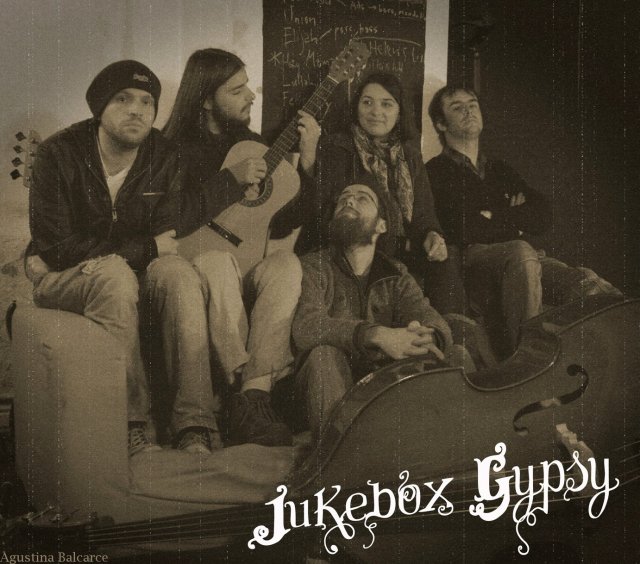 Hi Isaac, how did the five members of Jukebox Gypsy come together.

Hi Peter, The coming together of the different members of the band has been kind of a cumulative process but we first started as a three-piece in Liverpool in 2007. Dave, Ben and Johanna all lived in a big ol´ converted pub called The Spekeland, which used to house a lot of bands and that’s where I first started playing with Ben and Dave. We went around as a three piece for a good while and eventually took the act on the road in Ireland. Johanna came along for the ride and it was only after a good few gigs that we realized she had a gorgeous voice and should naturally be singing with us! Having her sing with us really brought everything together. We started going over to Ireland to tour pretty regularly after that and met Bean when we played at the Shack in Athlone. Bean is great at picking songs up real quick and with us not having a bassist at the time we were grateful he was willing to join in on the debauchery of the road! We’ve come a ways since then but that’s how it all came together.

What inspires the band to make music together?

I’d say we’re inspired to play together by the way the songs are transformed and really come to life when we give them the proper band treatment. Getting to take those songs on the road and see them change even more after they’ve been gigged for a while really keeps us going when we´re touring.

How would you describe your music and ‘Jukebox Gypsy’ as a band?

It’s hard to put a genre on the music as we all write in different styles but there are definitely a number of common characteristics. We´re an acoustic band and have always put a lot of emphasis on harmonies and acoustic guitar work. All five of us sing so the songs can range from having three to five part harmonies depending on what fits. Most of us take our influence from folk or folk-rock music but my influences come more from the American strain, Johanna takes hers from old English folk songs. So even within our common interest in folk music we cover a lot of ground. As for Jukebox Gypsy as a band, well, it’s a mess! No, I’m kidding. We´re all pretty easy-going people and the way the band has grown, with us all writing songs, means there’s no one person that leads. Some people may see this as a bad thing but it means we get to cover a lot of different styles and it keeps everyone in the band on their toes.

On your debut album it states that all songs were written by the band collectively. Could you go into a bit of detail explaining the songwriting process of Jukebox Gypsy?

Usually one of us will write the lyrics and basic chord structure of a song and then present it to the others. Then we play it for a while, get familiar with it and try to work out some harmonies and guitar parts. Often the songwriter will sing the lead part and the rest of us will embellish with harmonies but we also do a lot of swapping around. On our new album ´The Month´, that’s coming out in April, we´ve tried to split things up more by sharing verses or having another member of the band sing the lead part. Because we all sing and play various instruments, it gives us a lot of freedom to change songs around and record them as we think they should sound. Particularly in the studio we do a lot of experimenting with different arrangements for the same song. Eventually we’ll settle on one arrangement, gig it a lot and watch it change into something else again!

Instead of asking the usual question about musical influences I’ll ask you if there’s any unsung personal hero who has guided yourself or the band over the last number of years?

A few years back Dave brought ‘Post Office’ by Charles Bukowski on the road with him. Ben and I both read it in the same week and have been living by his philosophies ever since. After reading Post Office, we went through his other books pretty fast. The way he can describe the brutal honesty and (usually) misery of a situation in one line is what captivates me. For Ben its a little different. Being into horse racing, drinking and lots of women, they’re actually quite a like!

The new album is probably more diverse than our first one. Musically, its got folk, country, jazz, gospel blues and even some 80s rock! With us all contributing songs, we really haven’t put any limits on whats ‘allowed’ on the album or not. We’ve just been interested in strong songs, whatever the musical style may be. Topically, I think a lot of the album is a reflection on all the time we’ve spent together gigging through Ireland and some hard times we went through. We chose ‘The Month’ as the title track because it’s about a month that we were on the road and everything just went tits up. Those times are important because they can make or break a band, so Im happy to say we made it through in one piece.

Jukebox Gypsy are touring Ireland in April for the fourth time! What’s the response been like in Ireland to the band?

When we first came over we had about 15 gigs booked and we ended up staying for months. We’ve had such a better response in Ireland than we could ever have imagined in England–maybe because of the strong cultural tradition of acoustic music in Ireland or because we all like a few drinks in return for a song (another good tradition). That first tour we really didn’t know anybody except David McLynn, our promoter, and we travelled with a whole bunch of camping gear just pitching tents where ever we could. The first night we were in Ireland we pitched up two tents in the cemetery of Enniskerry and were awoken in the morning by construction workers having their tea. I was worried they were gonna tell us off but they were friendly as hell. That first time around in Ireland we did a lot of busking, impromptu gigs in pubs for pints and getting to know people. Since then the tours have been more and more organized and now we’ve got 30 dates booked for April alone.

Are there any bizarre spinal tap memories of the previous three tours of Ireland you want to share?

As for past Spinal Tap moments … some of them are definitely to vulgar to mention here! But we’ve had some cracking times. On the first time over to Ireland, we got to play a radio show in Belfast on FEILE FM. It was a live show and because of a computer error a Britney Spears song came on instead of us. That was our introduction to radio. A couple of years later we were meant to play on the radio near Mullingar somewhere on a pretty established radio show so we were excited to play it. As we were driving to the station the host of the show called out for us on air, asking where the hell we were. As it turned out, we’d gotten the time wrong by an hour and had managed to piss off the host and a choir of old ladies who were waiting to get on. There was another classic moment where we were busking and got asked to come and play at this party. We had no money or anywhere to stay and hadn’t eaten for about two days. When we turned up it was a hong kong millionaires party, they had hired Edith Summerville’s house in Cork and hired loads of servants. The band was treated to fresh lobster and champagne all night.

Listen to the track Waves from the album ‘The Month’

For The Turnstiles is the Folk Column for 4FortyFour! I'm an experienced maths teacher moonlighting as an unqualified freelance music journalist! I'm also behind the 2UIBestow website. If you're all about folk send me a message mixtape4melfi::at::gmail::com
View all posts by Peter444 →
This entry was posted in Interview, Introducing, Listen and tagged Charles Bukowski, Jukebox Gypsy. Bookmark the permalink.